Gastroenterology is the study of the normal function and diseases of the esophagus, stomach, small intestine, colon and rectum, pancreas, gallbladder, bile ducts and liver. Gastro Summit 2019 has over 16 tracks designed to update physicians, nurse practitioners, physician assistants and other healthcare providers practicing in gastroenterology and hepatology about new approaches to the diagnosis and management of gastrointestinal and liver diseases. Speakers will present data on multiple topics including general gastroenterology, inflammatory bowel disease, immunology and bariatric surgery, gastrointestinal bleeding, disorders, endoscopy and Hepatology.

Gastroenterology and Hepatology Conferences is considered as one of the major conferences that provides best platform for attendees to acknowledge and learn recent trends and advancements in field of Gastroenterology research and development. This stream of conference deals with the internal organs which help in digestion of the organic or inorganic food materials. Gastroenterology and Hepatology conferences showcase the discussion topics confronting the functioning of esophagus, pancreas, gallbladder, bile ducts, liver, stomach, small intestine, colon, and rectum.

• Creating contacts to provide a means for scientific and industrial exchanges

• Strengthening the network between the university and other related industries

• Summarize the studies of Gastroenterology

• Discussing the latest findings and achievements in Gastroenterology and Hepatology

Allied Academies cordially welcomes all the participants and contributors from worldwide to attend 5th International Conference on Gastroenterology and Hepatology, which is going to be held in Abu Dhabi, UAE during December 09-10, 2019 across the theme "Pre-eminent advancements and exploring new dimensions in Gastroenterology". Gastro Summit 2019 is a unique platform for a focused plan of the current research in the field of Gastroenterology and Hepatology which includes prompt Keynote presentations, Oral talks, Poster presentations, delegate views, board talks and exhibitions.We invite gastroenterologists, hepatologists, general physicians, microbiologists, virologists, pathologists, oncologists, surgeons, toxicologists, researchers, students, business delegates and young researchers across the globe. We invite you to join us at the Gastro Summit 2019,where you will be sure to have a meaningful experience with scholars from around the world. we look forward to meeting you in Abu Dhabi, UAE.

Market Analysis:
Scope and importance: The fundamental point of the statistical surveying is to build the attention to gastrointestinal scatters among individuals and to distinguish the gastrointestinal market scene and in addition critical progressions. Irresistible gastrointestinal sicknesses are additionally ending up progressively hard analyzing because of the expanding dispersal of among microorganisms and the development of the purported 'superbugs'. Mulling over these issues, the requirement for novel therapeutics is basic. This examination investigations different helpful choices as of now available and additionally potential items and classes of items that are probably going to significantly affect the future for the solution and also the over-the-counter (OTC) gastrointestinal medication markets. The gastrointestinal market is one of the key restorative regions most altogether influenced by the bland disintegration of piece busters. 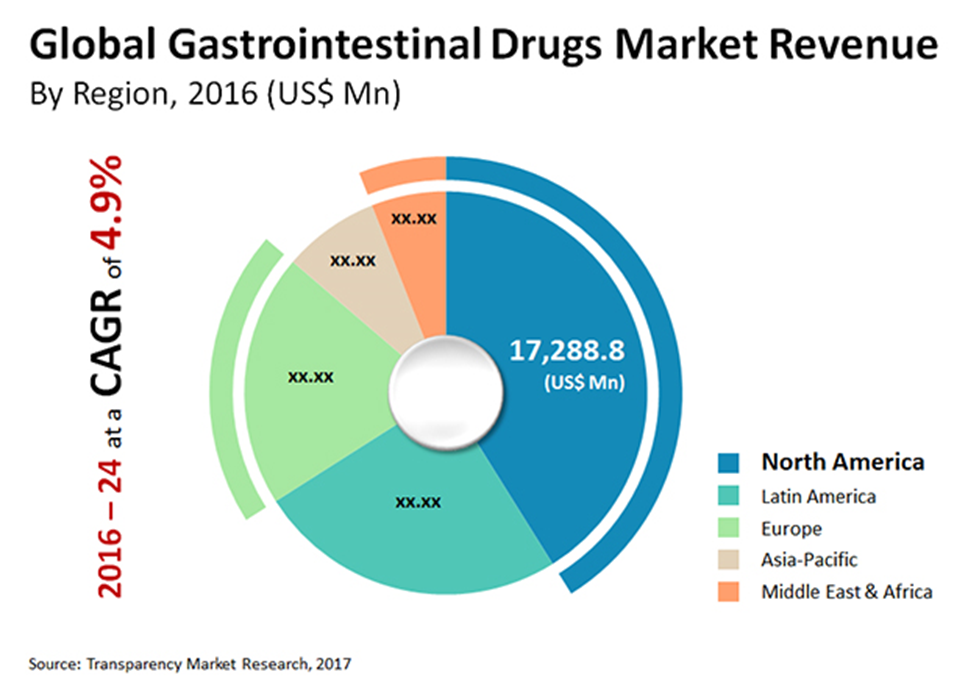 Global Market: The worldwide market for gastrointestinal turmoil therapeutics and diagnostics came to $49.6 billion of every 2015. This market is relied upon to develop from almost $51.8 billion of every 2016 to $63.8 billion of every 2021 at a compound yearly development rate of 4.3% from 2016-2021.
According to the exploration report, the worldwide gastrointestinal medications showcase is foreseen to be worth US$61.1 billion by 2024. By sedate class, corrosive neutralizers section not drove before, but rather is additionally anticipated that would stay in the main position in the coming years.
As far as geological districts, the Americas will represent just about 55% of the aggregate pieces of the pie by 2020 and will likewise be the real income supporter of the gastrointestinal therapeutics showcase all through the estimate time frame. The rising acknowledgment of biologics and the presentation of human services changes by different nations in the district will increase the market's development prospects in the following four years.
North America held 41% of the market in 2016. Europe has likewise been seeing solid development and is foreseen to keep being an alluring area for gastrointestinal medications showcase. "The rise of biosimilars for treating provocative inside illnesses will likewise be a key development driver for the market in Europe. Be that as it may, Asia Pacific is evaluated to be the locale with most extreme open doors for development in the coming years. The developing speculations and subsidizing in the field of life science examine and propelled treatments for the treatment of gastrointestinal maladies in creating countries, for example, China and India will fuel the development of the Asia Pacific market.

To Collaborate Scientific Professionals around the World

Journal of Hepatology and Gastrointestinal diseases

Journal of Liver : Disease and Transplantation
‹ ›
Special Issues
All accepted abstracts will be published in respective Allied Academies Journals.
Abstracts will be provided with Digital Object Identifier by

Be a member and support us

The organizers hold no responsibilities or liabilities of the personal articles of attendees at the venue against any kind of theft, loss, damage, due to any reason whatsoever. Delegates are entirely responsible for the safety of their own belongings.

No insurance, of any kind, is included along with the registration in any of the events of the organization.

Press permission must be obtained from Allied Academies Conference Organizing Committee prior to the event. The press will not quote speakers or delegates unless they have obtained their approval in writing. The Allied Academies is an objective third-party nonprofit organization and this conference is not associated with any commercial meeting company.

All the bank charges applicable during refund will be deducted from the account of participant.

All cancellations or modifications of registration must be made in writing to finance@alliedacademies.com

If due to any reason, Allied academies postpone an event on the scheduled date, the participant is eligible for a credit of 100% of the registration fee paid. This credit shall only be used for another event organized by Allied academies within the period of one year from the date of rescheduling.

If due to any reason, Allied academies postpone an event and the participant is unable or unwilling to attend the conference on rescheduled dates, he/she is eligible for a credit of 100% of the registration fee paid. This credit shall only be used for another event organized by Allied academies within the period of one year from the date of rescheduling.

All registrations, after payment of complete registration fee, are transferable to other persons from the same organization, if in case the person is unable to attend the event. Request for transfer of registration must be made by the registered person in writing to finance@alliedacademies.com. Details must include the full name of replaced new registrant, their title, contact phone number and email address. All other registration details will be assigned to the new person unless otherwise specified.

Registration can be transferred to one conference to another conference of Allied academies if the person is unable to attend one of the conferences.

However, Registration cannot be transferred if intimated within 14 days of the respective conference.

The transferred registrations will not be eligible for Refund.

Keeping in view of increased security measures, we would like to request all the participants to apply for Visa as soon as possible.

Allied academies will not directly contact embassies and consulates on behalf of visa applicants. All delegates or invitees should apply for Business Visa only.

Important note for failed visa applications: Visa issues are not covered under the cancellation policy of Allied academies, including the inability to obtain a visa.

If the registrant is unable to attend and is not in a position to transfer his/her participation to another person or event, then the following refund policies apply:

·        Before 60 days of the conference: Eligible for Full Refund after deduction of $100 towards service Fee.